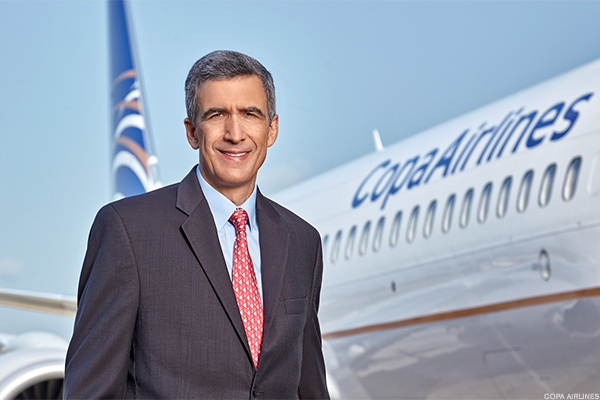 This story has been updated with comments made Monday morning by Delta Chief Financial Officer Paul Jacobson.

The combination of Latin America’s burgeoning airline economics and a first-class hub have boosted the fortunes of Copa Airlines (CPA – Get Report) .

The Panamanian carrier recently reported a fourth-quarter unit revenue gain of 10.7% and bested earnings estimates, triggering a one-day gain of 6% in its shares, which are traded on the New York Stock Exchange. Shares closed Friday at $106.85 and have risen 18% year to date.

“Latin America is coming back after two really hard years,” said Copa CEO Pedro Heilbron in an interview. “The main {problem} had to do with the Brazilian economy, which has recuperated since, and currencies devaluating. That affected traffic and yields.

“Latin American seems to be coming out of that, but we are still very careful,” he said.

Speaking at an investor conference, Jacobson said Delta’s gains in the region are being “led in particular by the Brazilian economy.”

“The LatAm region is emerging from a recession which could provide further upside earnings,” wrote Deutsche Bank analyst Mike Linenberg. In the case of Copa, improvements in unit revenue, load factor and yields “are expected to continue into 2017,” he said. He has a buy rating and a target price of $110.

“As a result of this improved performance and weak results elsewhere in the world, particularly the North Atlantic, we are seeing airlines increase capacity growth into the region,” Becker wrote. “If this growth continues, we would be cautious about the region as the economies in LatAm remain fragile and the currency environment remains somewhat unsteady.”

Heilbron said U.S. carriers are “adding back capacity that was taken out.” He noted that Copa’s capacity grew just 2% last year. “This year we are guiding to 6% growth, but that’s all from {aircraft} utilization and putting back some frequencies, not adding aircraft,” he said.

“We’re in a very good position to take advantage” of regional growth, he said. “There will always be competition, but our centrally located hub gives us a unique advantage.”

Panama City “is right in the middle of the Americas and being right at sea level it allows for smaller narrowbodies to fly longer distances, so we connect a lot of small thin markets {and} we also have a lot of traffic to bigger cities,” he said.