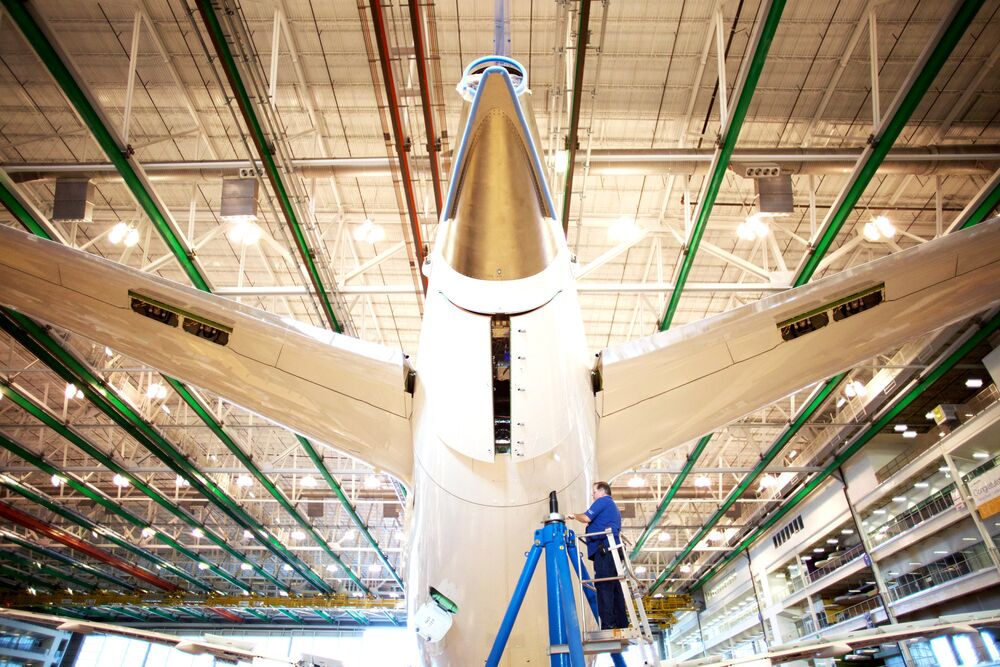 Deutsche Lufthansa AG is trying to decide whether to take its first Boeing Co. 787 Dreamliners, or to expand its fleet of Airbus SE’s marquee A350 wide-body jets as it updates its long-range aircraft, according to people familiar with the plans.

Lufthansa has requested proposals from both Airbus and Boeing, and is looking to order about 20 jets in a deal that may be finalized in the next few months, said the people, who asked not to be identified as the discussions are private.

The campaign to woo an influential blue-chip customer will probably hinge on more than the customary discounts for a deal valued at about $5 billion at list prices. The German airline is also asking the planemakers to help it get rid of its aging and fuel-hungry Airbus A340 models, the people said.

Representatives of Lufthansa, Airbus and Boeing declined to comment.

While Boeing and Airbus have on occasion taken back used jets to seal deals, they probably wouldn’t consider A340 trade-ins from just any potential buyer, said George Ferguson, an analyst with Bloomberg Intelligence. Demand and book values for the four-engine aircraft have dwindled as airlines shifted to flying more-efficient twin-engine models.

“It depends on the customer, the price people want on that asset,” Ferguson said. “If you have A340s, you’re pretty motivated to get them off the books in a way that makes it palatable to shareholders.”

The purchase of wide-body aircraft can define a carrier’s strategy for decades, as the jets have a lifespan of 25 years or more and resale values vary widely. They are also a major investment for both airlines and manufacturers, with the latter depending on large orders to help the multibillion-dollar programs turn a profit.

Lufthansa has already ordered 25 A350s, 12 which will begin operating in Munich by year-end, and holds options for 30 more. While it has vowed to reduce fleet complexity, five years ago the carrier ordered 34 Boeing 777-9 jets, with the first one due to arrive in 2020. Those would be on top of any potential order for the smaller 787s.

The Boeing 777-9 deal has come under internal scrutiny, and Lufthansa has said it is considering stretching outdeliveries, concerned about the cost and size of what will be the industry’s largest-ever twin-engine jetliner. The accord includes 14 jets that Lufthansa can opt out of taking.

Lufthansa is paying the price for investing too little in its fleet for two decades. The carrier’s 728 aircraft were, on average, 11.4 years old last year, twice the age for Dubai-based Emirates, the world’s largest long-haul carrier.

Lufthansa’s fleet includes almost 100 four-engine aircraft, which produce the highest fuel bill of any airline in Europe. Its 50 A340s, almost a fifth of the models still in operation worldwide, are increasingly a liability with oil prices near the highest in about four years. The oldest -300s, delivered between 1996 and 2001, are considered likelier candidates for retirement over the stretched -600s, some of which are less than a decade old.

Both planemakers have acquired used A340s over the years. Airbus repurchased models as resale prices plunged below the amount it had guaranteed customers. Boeing accepted trade-ins from China Eastern in 2012 and Singapore Airlinesin 1999 — both as part of complicated transactions that helped land sales for its largest twin-engine jet, the 777.

Airbus made only 375 of the A340, which were rendered obsolete as twin-engine aircraft like the 777 and Airbus A330 were certified for long-range flights. Since production ended seven years ago, secondary-market values have plunged.

The A340 did enjoy a brief resurgence this year, which peaked over the summer, as a short-term replacement for Dreamliners grounded while their Rolls-Royce Holdings Plc Trent 1000 engines were repaired, said George Dimitroff, head of valuations for Flight Ascend Consultancy.

“That’s literally the only limited demand we can see for that aircraft, and trading prices are all in the single-digits millions of dollars,” said Dimitroff. “If you tear it down, some parts have value. A lot of the airframe parts are common with the A330.”