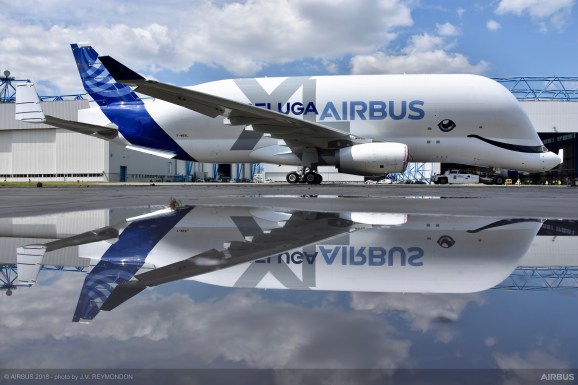 Airbus is a veritable titan of industry. In 2016, it generated more than $76 billion in revenue and employed a workforce of around 134,000. It’s the world’s largest space business. And it offers a range of passenger airliners from 100 to more than 600 seats and supplies tanks, combat, transport, and mission aircraft.

But at its heart, it’s AI- and cloud-forward

“In Airbus’ case, AI has been a journey for decades,” Adam Bonnifield, VP of artificial intelligence at Airbus, said onstage at VB Summit 2018 on Monday. “The price of using these technologies has plummeted, because of the explosion of computing power availability.”

Airbus takes a data lake approach to management and analysis. It builds a reservoir of data for in-service aircraft, which it subsequently makes available to companies and individual users.

JetBlue was a launch customer of the first module of Airbus’ Scheduled Maintenance Optimizer platform, which taps algorithms to determine the optimal maintenance schedule for fleets of more than 200 aircraft. It’s part of Airbus’ eponymous Services by Airbus offering, which includes training, flight operations, air traffic management, and other products.

“We can take some of the biggest problems in our industry — grounded aircraft, quality nonconformity problems, and operational delays — and use AI to solve them, period,” Bonnifield said. “About $40 billion is spent on delays in the United States, […] and about 80 percent of airlines are chronically late. It’s because they don’t have access to certain data that would help them manage when their plane lands and before it takes off.”

More than 200 airlines are using Airbus’ Smarter Fleet technology. And others are tapping the firm’s partnership with IBM, announced in 2013, which provides operators with IT services for maintenance, engineering, and flight operations.

Skywise pulls in aviation data from sources across the industry — including work orders, spares consumption, components data, aircraft and fleet configuration, onboard sensor data, and flight schedules — and surfaces it for users in a unified dashboard. And that’s just the tip of the iceberg. Skywise also taps data sources that are traditionally hosted on isolated servers, such as operational interruption history, parts replacements, post-flight reports, pilot reports, and aircraft condition monitoring reports.

“We’ve taken sensor data from our aircraft […] and other operational data we use to service planes and maintain them into one […] environment,” Bonnifield explained.

The goal is to marry operational, maintenance, and aircraft data in a secure platform for storage, management, and analysis and to give users insights at the aircraft fleet and global levels. More than seven major airlines around the world use Skywise, which Airbus intends to make available for Airbus helicopters, military aircraft, and other products operators in the near future.

But Airbus admits it doesn’t have all the answers. That’s why it has recruited more than 100 companies to solve problems plaguing the industry — for example, how to extract data from flight manuals — as part of its AI Gym initiative.